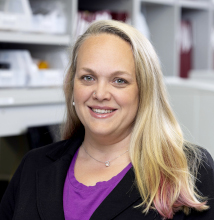 Kathryn Dixon is the Chemistry Department Supervisor at ARL Bio Pharma.  Kathryn received her Bachelor of Arts degree in Chemistry from the University of Missouri at Kansas City.  She has been employed at ARL since 2012 starting as a Chemist II and advancing to a Chemist III and Senior Chemist before becoming the department supervisor in February 2022.  In her previous roles she spent most of her time performing testing in the laboratory and gaining expertise in the majority of USP raw material testing including various wet chemistry and instrumental techniques and particulate matter testing on finished products.

Before joining ARL, Kathryn worked as a Technical Specialist for 2 years learning SEM (Scanning Electron Microscopy) and TEM (Transmission Electron Microscopy) analyses of Titanium Dioxide.  Prior to that, Kathryn worked as a Laboratory Technician, Chemist, and Project Manager for 5 years at KCAS, a CRO in Shawnee, KS (formerly a part of AAIPharma, Inc.).  There she conducted GLP method validations for NCE’s (New Chemical Entities) and pharmacokinetics studies looking specifically at the bioavailability and bioequivalence of generic formulations being developed for existing pharmaceutical products.